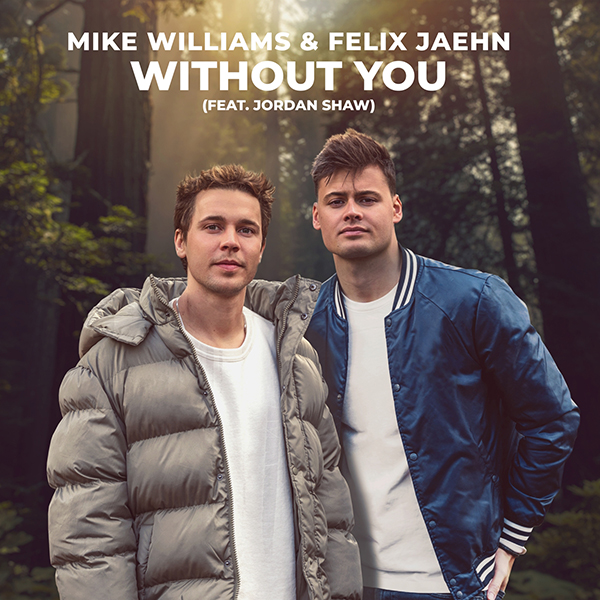 Dutch and German DJ and producers Mike Williams and Felix Jaehn team-up for an uplifting, melodic dance tune “Without You” with vocals by Jordan Shaw. A worldwide release is set for Wednesday May 12th.

While being in quarantine last summer for Mike William’s Asia tour, Mike worked with Felix, who was in Germany at the time, to set the basis of this infectious collab track.

Mike Williams: “We were so happy with the response on our last collab ‘Feel Good’ that we both felt we needed another one. Felix is such a nice guy to work with and knows what works and what doesn’t. This track felt so good for both of us, it’s emotional, has a strong hook but also still danceable. I’m super excited to release it!”

Felix Jaehn comments: “So happy that Mike and I are finally reunited on a song. I enjoyed every single moment we had together with ‚Feel Good‘! Can’t find to play ‚Without You‘ live for the first time.”

Williams’ breakthrough came in 2017 with hit ‘Feel Good’, a collab with none other than Felix Jaehn. Mike then released club banger ‘Lullaby’ with R3HAB that solidified his worldwide success, making his way into the DJ Mag ‘Top 100’ on two occasions already. On the gig front, he is a regular at internationally renowned festivals such as ULTRA Miami, Tomorrowland, Parookaville and Mysteryland.

Precociously inclined from a very young age, Felix Jaehn has been involved in the realm of music for quite some time. Jaehn’s remix of OMI’s ‚Cheerleader‘ achieved the #1 charting position in 55 countries and his follow up single, ‚Ain’t Nobody‘, hit #1 in 36 countries making him the youngest artist in history to receive two diamond awards. His streaming prowess with 5 billion plays to date, propelled him to stages at Tomorrowland, Parookaville, ULTRA Miami, and more, not to mention being voted ‚Best Dance Act‘ once again at the German Radio Awards.