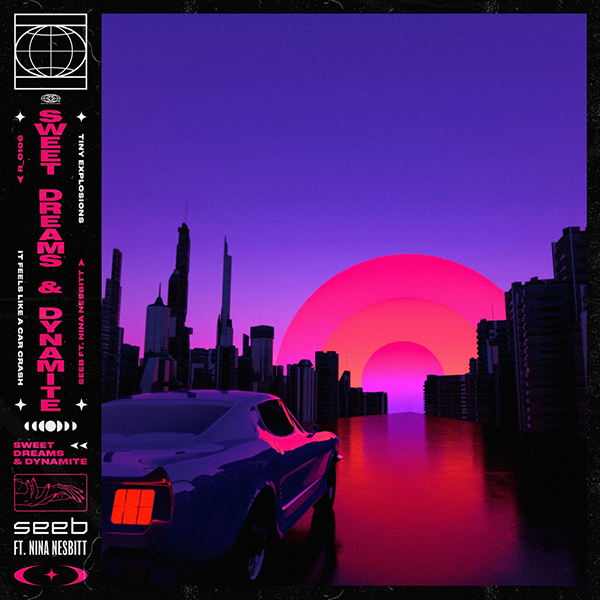 Having first made a name for themselves with a phenomenal 2 billion streams for their smash hit remix of Mike Posner’s ‘I Took A Pill In Ibiza’, Norwegian duo Seeb’s journey has included huge remixes for Ed Sheeran, Shawn Mendes, Taylor Swift, Coldplay and many more. Between their originals and remixes, Seeb have amassed a career total of 5 billion streams, and commenced 2021 by releasing their debut album ‘Sad In Scandinavia’.
Now Seeb tee up another hit in the making by teaming up with ascendant pop icon Nina Nesbitt for the new single ‘Sweet Dreams & Dynamite’.
With ‘Sweet Dreams & Dynamite’, Seeb have created the kind of instantly addictive modernist pop that can speak to a worldwide audience. Playing with the warmth of the track’s bouncy bass and sparkling synths, they provide the perfect context for Nina Nesbitt’s topline to shine. And she truly delivers, captivating with a vocal that moves freely from autotuned distortion to a surging falsetto and a sharp staccato delivery. Telling the story of a love that’s lost, the song uses sorrow as a starting point for a production of pure positivity.
Seeb – Espen Berg and Simen Eriksrud – say, “We’ve been looking for an opportunity to work with Nina ever since we heard ‘The Best You Had’ a few years ago. Then suddenly out of the blue she sent across a lovely piano ballad idea she had been working on and we immediately clicked with it and jumped all in. It really took on a direction of its own and we are really happy with how it turned out. Nina is a pleasure to work with and being from Swedish/Scottish parents we felt right at home from the start.”
Nina Nesbitt adds, “I’m so excited to collab with SEEB on ‘Sweet Dreams & Dynamite’. I love where they’ve taken this song after sending them it as a piano ballad. I’ve been a huge fan for a while now so I’m really pleased to have something together.”
Berg and Eriksud formed Seeb in Oslo after initially finding success as collaborators for a range of rising Norwegian talent. As well as their high profile remixes, they’ve also been invited to work on original tracks from numerous other leading artists, notably with Bastille on ‘Grip’ (which lead to both artists performing two nights at the O2 Academy Brixton), with OneRepublic on ‘Rich Love’, and also hitting big numbers as the lead artist on ‘Breathe’ and ‘What Do You Love’.
Seeb’s debut album ‘Sad In Scandinavia’ extended their flair for collaborations, calling on international artists (Bastille, Olivia O’Brien, Dan Caplen) and big Nordic talents (Dagny, KIDDO, Julie Bergan) alike. They subsequently reconnected with their roots in the dance world with the accompanying remix album, which featured Steff da Campo, BLOODLINE,Hartzon and many more.

Nina Nesbitt’s recent singles ‘Life’s A Bitch’ and ‘Summer Fling’ have shown that her global following is continuing to expand exponentially since her second album ‘The Sun Will Come Up, The Seasons Will Change’ amassed a remarkable 530 million streams. ‘Summer Fling’ accelerated to #1 on TikTok UK’s Hot 50 while also being added to 40 New Music Friday playlists all over the world, while ‘Life’s A Bitch’ received Radio 1 airplay and a second wave of key playlist adds ahead of her headline set at the first ever Metaverse Festival. ‘The Sun Will Come Up…’ elevated Nina to a place in Spotify’s Top 500 artists in the world as while her tracks have
featured on over a thousand of the platform’s playlists. Her growing global reputation was further emphasised when she was named by Taylor Swift during her acceptance speech for the Woman of the Decade Award at Billboard’s Women in Music event.